Governed by the Property Ombudsman

A decline in the number of rental properties on the market is driving rents upwards across England and Wales, fresh figures show.

The latest Your Move England & Wales Buy to Let Index, created and reviewed in partnership with Cebr, shows that the average rent across England and Wales now stands at £874 per calendar month (pcm), following a 3.1% price increase in the last 12 months.

On an annual basis, Wales saw faster rent growth than anywhere else, with prices increasing by 4.3% in the last 12 months, although this area still remains one of the cheaper places to rent property, at an average of £595pcm.

The next strongest growth was recorded in the South East of England where the average property was let for £884pcm, up 3.6% year-on-year, while in the East of England the typical rent is now £873pcm after 3.3% growth.

The rent increases in most areas can be associated with a fall in the housing stock available to renters. This can be attributed to the recent tax changes affecting landlords and the stamp duty charges on second homes.

Richard Waind, director, Your Move, commented: “We are now starting to see the real impact of the government’s stamp duty revision, plus the additional tax changes which have hit landlords hard.

“The outcome has been a decline in the number of rental properties on the market and this has had the effect of pushing up prices for tenants.”

The only region to see prices fall compared to last year was the South West, where rents are down 2.2% year-on-year to an average of £667pcm.

The latest data also shows that yields in most areas of England and Wales have fallen over the past 12 months, from an average of 4.9% a year ago to an existing rate of 4.4%.

Buy-to-let investors in the North East of England continue to enjoy the highest return at an average of 5.2%.

“The Private Rental Sector could still be seen as an attractive opportunity for investors, with the North East and North West in particular seeing strong growth,” said Waind.

He added: “Although buy-to-let investors are preparing for the new PRA changes coming into effect in September, it’s clear that there are still people who believe that, property remains a viable investment option.” 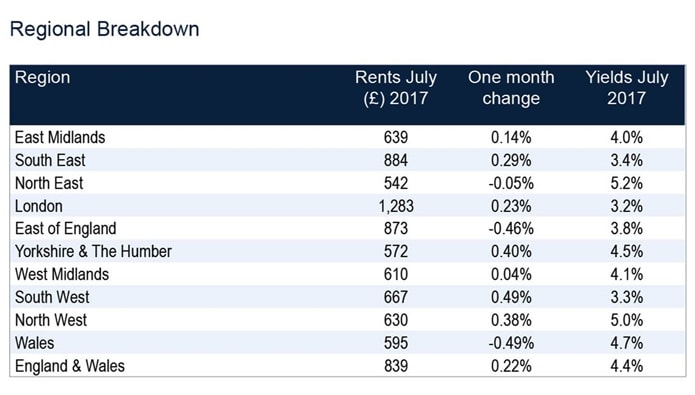